What’s your idea of a perfect restaurant? One with good food? Or a nice ambiance maybe? Nice decor perhaps? What about one that publicly spanks you if you don’t finish your extremely unhealthy meal?

Well, that’s the Heart Attack Grill for you. With high-calorie meals and a spanking gimmick, this place is notorious for how bizarre it is.

Let’s see what exactly goes on in this restaurant famous for spanking its customers now, shall we?

Went to a place called heart attack grill, if you don’t finish your food they smack you... pic.twitter.com/ZszGa5VSnD

The mastermind behind the concept, John Basso, came up with the idea after writing about it for his marketing thesis. The restaurant started operating in 2005 in Arizona, right when the obesity crisis in America was getting traction. Why, you ask? Well, this was a very calculated move to capitalize on controversy. And it ended up being just as controversial as Basso had hoped. Now running in Las Vegas, the restaurant runs on the philosophy ‘Every publicity is good publicity'. After all, we’re talking about it here in 2021 despite the fact that they’ve spent no money on advertising.

The exterior of the restaurant is covered with posters bragging about how unhealthy it is, like a badge of honor. The interior décor of the place is styled like a 50’s style diner. But a closer look reveals some disturbing additions -- the giant pill bottles and paddles dangling from the ceiling, and the movie posters modified to be burger-themed plastered on the walls, being some.

Customers are provided with a hospital band and a plain gown to wear as a bib before they start eating. The waitresses are even dressed in nurse outfits and will sit and your table while taking your order to mimic a medical consultation. The drinks menu is medical-themed and served accordingly in pill bottles, syringes and IV drips that drip down to your glass.

Now let’s talk about the burgers. Their famous Bypass Burgers start from ‘Single’ and go up to ‘Octuple Bypass’, and consist of up to 8.5lbs beef. The burgers can be accompanied by Flatliner Fries, fried in pure lard, and their Butterfat Milkshake, which is served with butter. 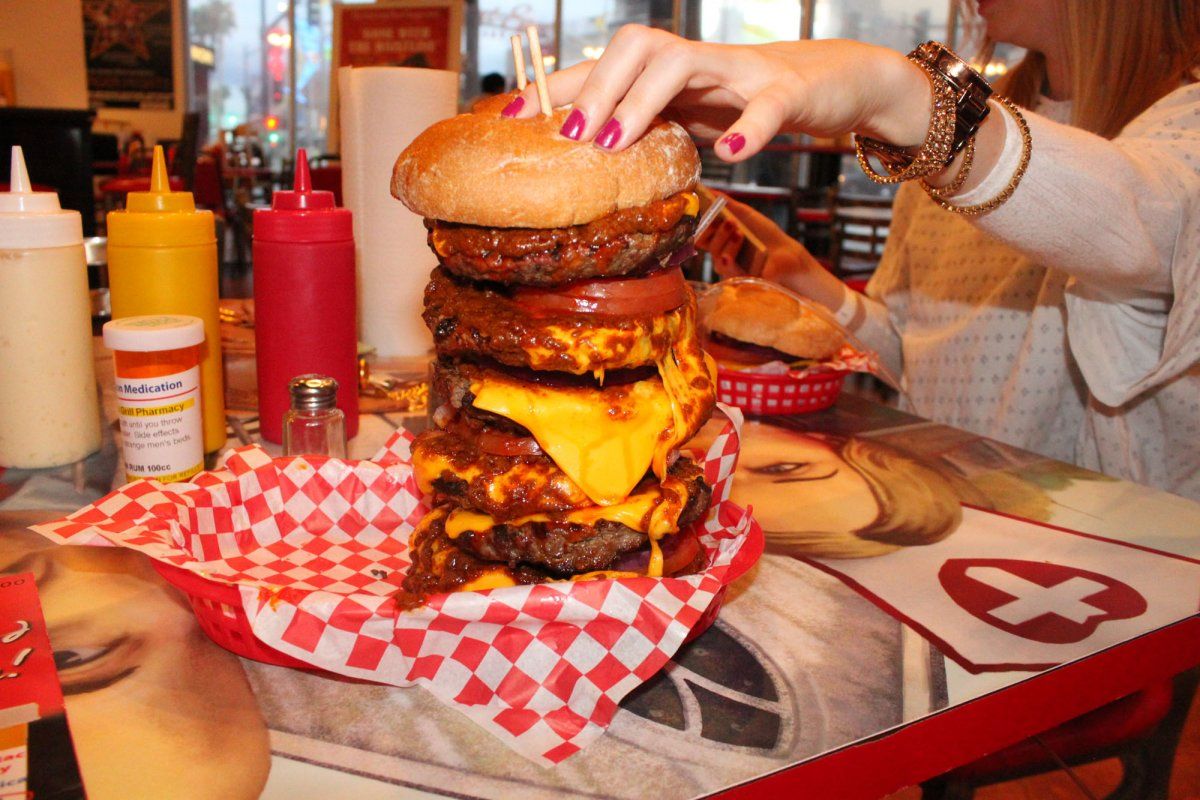 The Octuple Bypass burger is their most popular item and consists of: 4 ½ pound hamburgers, 3 tablespoons of lard, 20 slices of bacon, 8 slices of American cheese, 20 slices of caramelized onion baked in lard, 8 tomato slices, 1 tablespoon of mayonnaise, 2 tablespoons of ketchup, and 1 tablespoon of mustard. If you can finish it, you’ll be wheelchaired to your car by a ‘nurse’ in a blaze of glory. If you fail, however, you’ll be publicly spanked by a paddle. Oh, and it’s worth 19,900 calories, just in case you were planning to try one.

The restaurant has gained plenty of backlash for promoting obesity (a few people have actually died while eating here), but the premises are always filled to the brim with people so it's safe to say the business shows no sign of slowing down.

What do you think of the Heart Attack Grill? Do you ever want to visit? Are there more outrageous restaurants you want us to cover? Let us know in the comments below! Follow us on Facebook for more content like this!

Also read: These Men Found Creative Ways To Flaunt Something Many Guys Are Ashamed Of